In the first few steps of this series, we’ve talked a bit about the idea that the success of any app — and especially a small indie project — often hinges on the quality of execution. An app that is thoughtfully designed and makes obvious the amount of care and polish that went into building it likely stands a much better chance of capturing some real interest than one that feels same-y or slapped together.

This week, I want to start looking at an aspect of UIKit development that plays a huge role in creating that feeling of polish and care, but that, in the past, I’ve found to be a bit of a pain to work with: custom view controller transitions! 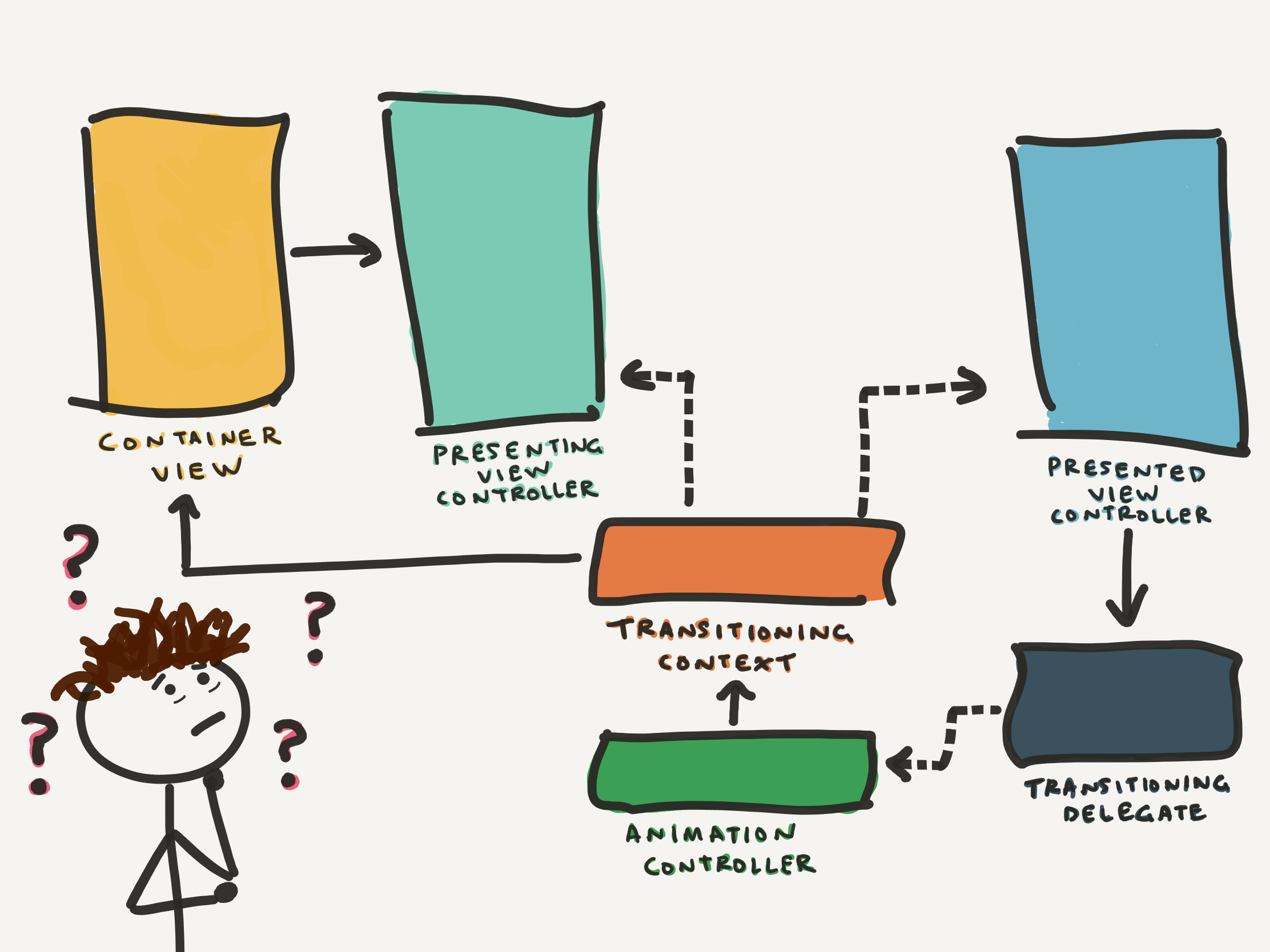 In building my definitely-soon-to-be-critically-acclaimed indie app, a big goal of mine has been to try not to compromise on design ideas because of complications or inconveniences in implementation. One place UIKit makes it really tempting to compromise is in presenting and dismissing view controllers. Do you really want to have to figure out what makes subclassing UIPercentDrivenInteractiveTransition different from implementing your own class conforming to UIViewControllerInteractiveTransitioning…or would you rather just call present(_:animated:) and move onto the fun stuff?

Well, in the name of lofty design ideals, I decided that custom view controller transitions ARE the “fun stuff”, damn it, and I hunkered down and endeavoured to truly, totally, finally wrap my head around this whole clustercuss of classes and protocols. Although I’m not sure I’ll ever feel like I’ve quite reached the summit of this treacherous climb…I’ve built some cool stuff and learned a bunch along the way. Let’s get into it!

What this is, and what it is not

This is really just meant to be a primer on the roles of each of the entities involved in a custom view controller transition — there’s a lot to keep track of, and in trying to master this stuff, I personally found it really helpful to take the time to step back and fundamentally understand what each of the relevant classes and protocols are responsible for before jumping into building anything. This isn’t a step-by-step tutorial with code examples — there are plenty of those out there — but rather, an attempt to explain the basic building blocks of custom view controller transitions in a way that’s useful, easy to digest and quick to refer to when things start to get blurry. Basically, it’s what I wrote for myself to make sure I fully understood what I was doing, and wasn’t depending on anything that felt like magic.

Note from the future: I’ve written a series of 3 articles on some more concrete, advanced topics having to do with custom view controller transitions. If this article is a bit too simple for you, feel free to jump ahead! Here’s the first one.

Before getting started, I have one more important thing to say:

Read the documentation! It’s quite good!

Because custom transitions can feel pretty overwhelmingly complicated, and the docs are admittedly a bit dense, it can be tempting to skip them and just go hunting for a tutorial that’s going to hand you all the code you need. What I’ve found is that a lot of the tutorials out there do things quite differently from one another, and they often struggle to explain why exactly they’re doing things in a particular way, or how their implementation might be tweaked or extended to do different or more complex things. Apple’s own documentation might not give you a bunch of code you can paste directly into your project, but it will help you understand what the cuss is actually going on.

So, consider this to be a concise companion guide to Apple’s helpful but heavy documentation. It’s not a replacement, and neither is any tutorial you find on the internet. Actually, that’s true of pretty much any development topic, but I digress. Onwards!

The anatomy of a custom view controller transition

Note: I’m dealing specifically with custom modal transitions here; a lot of this is also applicable to customizing navigation controller transitions, for example, but that’s not really within the scope of this article.

So how exactly does it all fit together?

It’s tempting to want a single, “correct” answer to this question. How do I know if I’m doing it right? Unfortunately, like pretty much anything in software development, there are lots of different ways to actually piece together your custom transitions, each with their own set of trade-offs. Nonetheless, to provide a bit of clarity, let’s step through some simplified presentation and dismissal cases to start to get a sense for how the various entities behave, and how they communicate with each other.

Our custom transition begins the moment present(_:animated:) is called. I’ve written a short, bad play about it, because it’s honestly a much more readable way to describe the flow of information than dryly describing every technical step 🎭

UIKit
Yeah, let’s do it. Okay, says here you’re the transitioning delegate, so…do you have a presentation controller for me?

UIKit
Perfect, thanks. [Starts setting things up behind the scenes by creating the container view, transition context, etc.] Okay, I’m also going to need an animation controller to actually present this thing.

HomeViewController
Oh right, here’s a FancyWarningAnimationController you can use. I’ve made sure it knows to present rather than dismiss.

UIKit
Good, good. Do you have an interaction controller for me as well?

UIKit
Sure! Let’s get started then. Hey presentation controller, FYI: we’re about to start the transition.

FancyWarningPresentationController
Got it. [Adds a dimming view to the container view.] Hey UIKit, can you make sure this dimming view fades in at the same time the rest of the presentation animation is happening?

UIKit
Yep, no problem. Also, where do we want the WarningViewController to end up on screen? The animation controller’s going to want to know.

FancyWarningPresentationController
Let’s just have it cover the bottom half of the screen.

UIKit
Works for me. Okay, animation controller? You’re up. Everything you need should be here in this transition context. Let me know when you’re done.

UIKit
Nailed it. Thanks everyone!

Let’s assume a pan gesture recognizer is set up on our WarningViewController’s view to handle the dismissal interaction. Where the gesture handler is actually implemented isn’t terribly important, as long as it has a direct line to the interaction controller. As soon as the gesture begins, we call dismiss(animated:), and thus begins our second short play about an interactive dismissal.

[A clear, crisp fall morning. The old Mac startup sound plays off in the distance.]

WarningViewController
Hey, uhh…UIKit, is it? Weird question, but: can you dismiss me?

UIKit
Yeah, no problem. I see here that your transitioning delegate is HomeViewController — oh yeah, I remember helping them present you a while back. I’ll get in touch with them and we’ll have you dismissed in no time.

[UIKit picks up the phone and calls HomeViewController.]

UIKit
Hey, me again. WarningViewController needs to be dismissed, and since you’re their transitioning delegate, I’ll need a few things from you again.

HomeViewController
Oh yeah no problem! You still have that presentation controller I gave you, right?

UIKit
Yep, I’ve been holding onto that.

HomeViewController
Okay, here’s another FancyWarningAnimationController for you to use — this one’s set to dismiss. And, I know WarningViewController only ever dismisses interactively, so you should take this UIPercentDrivenInteractiveTransition as well — there’s already a gesture handler set up who knows how to use this.

FancyWarningPresentationController
Sounds good. I’m going to fade out this dimming view — can you make sure the timing lines up nicely with the gesture?

[FancyWarningAnimationController, UIPercentDrivenInteractiveTransition, and the gesture handler all huddle together. As the pan gesture progresses, the gesture handler reports progress to UIPercentDrivenInteractiveTransition, who works with FancyWarningAnimationController to figure out what the views involved in the transition should look like at the given progress level. As a team, they continuously update WarningViewController’s position to reflect the progress of the dismissal. It’s a sight to behold. Eventually…]

[FancyWarningAnimationController completes the dismissal animation and gives UIKit the good news. They all look at each other contentedly. Their work here is done.]

That may have gotten a bit silly and oversimplified, but honestly, when you’re new to this stuff, it’s already a lot to take in, and I needed to wrap this up. There are a lot of moving parts here, they all interact with each other in less-than-obvious ways, and it can be hard to figure out exactly who should be responsible for what. As someone who is in the midst of building what could very well be my final full-fledged UIKit project, I wanted to make sure I had a really firm understanding of this whole view controller transitioning API, and could properly make use of it to build exactly what I wanted. I hope sharing some of that knowledge in a lighthearted way helped clarify some things for a few folks out there! If, on the other hand, you:

a) think this whole thing still seems wildly overcomplicated, and
b) are able and willing to build whatever it is you’re building with a promising, but young and somewhat janky new set of tools…

SwiftUI might be looking pretty good to you right about now 😏

Thanks for reading! This is a relatively quick look at a pretty big topic, so if you need some help or have any follow-up questions, Let me know! Find me on Twitter here 🐦